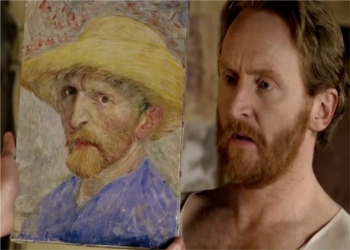 Looks nice.
"I've seen many things, my friend. But you're right. Nothing's quite as wonderful as the things you see."
— The Doctor
Advertisement:

The one with flowers for Amy and a moving scene set to Athlete's "Chances".

Written by Richard Curtis, comedy writer whose works include Blackadder, Four Weddings and a Funeral, and Notting Hill; in his words, he wrote the episode so his kids can watch.

The episode was followed on the BBC by information on suicide prevention, as the episode discusses Vincent van Gogh's suicide.

The actors, being British, use the British pronunciation, "Van Goff". In Dutch, the correct pronunciation is (in IPA) [ˈvɪnsɛnt vɑŋ ˈɣɔx]. "Gogh" is pronounced as a soft Southern Dutch guttural G (a bit like a gargle), then an "o" as in "or" (without the "r" sound), and finally the Scottish sound at the end of "loch". The museum guide's pronunciation of the name is closer to the Dutch.

Terror lurks in the cornfields of Provence, but only a sad and lonely painter can see it.

Vincent van Gogh's picture ends up in a Parisian gallery in the present day, to which the Doctor's taking Amy as a treat — since she is something of a fan of Vincent's — only the latest in a whole row of treat visits. She doesn't understand why he's spoiling her so much, and is still blissfully unaware that her fiancé is very dead and erased from history. The Doctor keeps up a perfect Stepford Smiler act for her.

They look at The Church at Auvers

and spot a monster in one of the windows. The Doctor approaches a rather long-winded Bill Nighy-in-a-bowtie, named Dr. Black, the museum's curator. Dr. Black has been talking to a tour group about how van Gogh churned out a whole load of paintings near the end of his life but had incredible unluckiness in selling any of them. He's enough of an expert on Vincent that he can place the time of the painting's creation to between the 1st and 3rd of Jun, 1890. That's how good he is. The Doctor and Dr. Black compliment each other's bowties for a bit, and the Doctor and Amy head to 19th-century Provence.

They arrive in a little town and set about finding Vincent. They soon discover him at a local café

, failing to sell yet another piece of his work, a self-portrait, and attempt to engage him in conversation. Vincent isn't too impressed by the Doctor — he's had enough of the doctors his brother keeps on sending him — but is rather taken with Amy. Who wouldn't be? Thanks to her, he agrees to share a bottle of wine with them. He assumes Amy's also Dutch, because according to the TARDIS speaking French with a Dutch accent is the equivalent of speaking English with a Scottish accent. Then, just as the Doctor is clunkily trying to pursue the subject of the church, there's a scream.

Rushing to the scene, they find a dead young woman and her distraught mother, who pins the blame on Vincent's madness. It's followed up by a barrage of stones, and the trio have to leg it. The Doctor invites himself and Amy as Vincent's guests.

It turns out that the monster is invisible, but Vincent can see it because of his intense synaesthesia. His impressionist painting, however, isn't accurate enough for the Doctor to identify the species, but he's got an old gadget in his TARDIS that can identify the original form of living creatures when given enough data. It renders the Doctor as the first and second Doctors respectively, and renders the creature as a giant four-legged Krafayis. The Doctor realises a bit late that it's the monster's reflection in the screen that he's seeing, but manages to get away, with the gadget strapped to his chest like an elaborate steampunk rearview mirror.

After chasing away the Krafayis, the Doctor and Amy offer to spend the night with lonely Vincent, and admire the works that Vincent believes to be worthless (but that they know will become art treasures in the future). Vincent wakes up the next day, stunned to see that the Doctor has prepared them breakfast, and Amy waits outside surrounded by dozens of sunflowers. The two insist they will come with him tonight when he goes to paint the nearby church, themselves knowing the beast will appear there, and then will be out of Vincent's hair forever. Vincent crumbles at this, and locks himself in his bedroom, crying that people simply leave him. Neither the Doctor nor Amy can coax him out of his emotional state, and prepare to go to the church alone.

As they are about to leave, Vincent emerges with his painting supplies, ready to help out. As they travel, Vincent confides to Amy that he senses something missing in her life and a great sadness in her, and decides that if she can soldier on, so can he. They arrive at the church, and Vincent starts to paint. The Doctor quickly becomes bored of waiting for something to happen, and just when he's about given up, Vincent spots the Krafayis moving about inside. The Doctor tells "Amy and Rory" — Amy and Vincent — to wait.

As soon as the Doctor is inside, Amy and Vincent look to each other and merrily race in after him, with an "Amy, I love you!" from Vincent.

The Doctor has trouble tracking the invisible beast, and he and Amy are forced to take shelter inside a confessional. Vincent, staying back, describes the movement of the Krafayis to his friends, and the Doctor realises the beast is blind and wounded, left behind on Earth by its pack as dead weight. He tries to talk to it, but the Krafayis is too panicked to understand that the Doctor can help it. The beast starts to charge at Vincent, and he holds up his easel in self-defence... upon which the beast impales itself.

As the Krafayis dies, the Doctor races out to try to help it, but the wound is too great. Vincent realises that he and the Krafayis share a similar loneliness and along with the Doctor helps to soothe the creature in its final moments.

The three leave the church and lie down, hand-in-hand, on a nearby hill. Vincent directs them to the starry night

above, describing how he sees the heavens as a canvas. Both the Doctor and Amy are awed by this sight, as we see the realistic starscape transformed stunningly into van Gogh's painting. Vincent holds the hands of his friends close to him.

The next day, Vincent escorts them to the TARDIS, attempts to woo Amy into marrying him (to which she notes she's "not the marrying type"), and says his goodbyes with a bit of sadness. The Doctor and Amy pause before entering the TARDIS, a knowing look in their eyes.

The next thing Vincent knows, he's inside a spaceship that's Bigger on the Inside with dials and levers that go whoooosh. Then he's being pulled through the streets of Paris in 2010, into the same gallery from before. The Doctor ignores Vincent's questions about the strange technology he sees, instead dragging him to the van Gogh display room from before, holding him back. Within Vincent's earshot, the Doctor encourages Dr. Black to expound upon the greatness of van Gogh's work. Dr. Black holds the utmost respect for the painter, calling him one of the greatest artists of all time. Vincent, elated at this, feels tears welling up, races to embrace Dr Black and thanking him profusely for his compliments.

The Doctor and Amy return Vincent to his time; Vincent leaves the two, much much happier than a few hours ago as he returns home.

Amy insists they return to the present. Surely their actions have allowed Vincent to live out his life and create many many more works? Yet when they arrive at the museum, nothing has changed. All the same artwork is present, and Dr Black laments about van Gogh's suicide at an early age. Amy tries to understand. The Doctor comments that life has good things and bad things, and all they were able to do is help give Vincent a few more good things within his short life. The Doctor demonstrates that the The Church at Auvers no longer has the frightening creature at the window, and one of the sunflower still-life paintings now bears a small inscription above Vincent's signature: "For Amy".

Amy: If we had got married, our kids would have had very, very red hair.
The Doctor: The ultimate ginger.

When Vincent Van Gogh slays an invisible alien that's been terrorising the locals, he makes a sad discovery

When Vincent Van Gogh slays an invisible alien that's been terrorising the locals, he makes a sad discovery