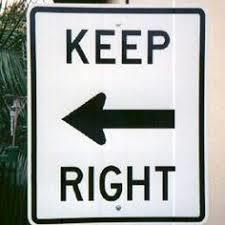 If ever in a comedy somebody tells a character or a group of characters to move/turn left, you can bet the character/one or more of the group will go right instead, prompting the phrase, "Your other left!" (Or they correctly turn left, at which point the first character realizes that they actually meant to say "right" and tries to cover with the same phrase.)

If this doesn't happen, it's usually replaced with a confused exchange about "My left or your left?", even if the characters are facing the same way.

Another version may involve some version of the following exchange:

A similar gag: everyone on TV gets confused between port and starboard. (Incidentally, port is ship's "left", easily remembered as they both have four letters. If you still find yourself confused, remember that both right and starboard are the longer words, and it's always the same side of the ship, so no confusion can happen on a ship.)

Sometimes appears as confusion between "house left" (the audience's left) and "stage left" (which means the actors' left when facing the audience, and therefore house right).

To be entirely fair, though, it's not like this doesn't actually happen with an alarming regularity in real life. We're just talking about its predictable appearances on TV. For some reason, it's always "your other left," never "your other right", even though you'd think both occur equally often in Real Life (especially in languages in which the Who's on First? joke mentioned above doesn't work). A likely explanation is that most people, being right handed/right dominant, will default to the right when confused, prompting "The other left". Compare The Exit Is That Way.

Leni, scooch to the left!

Leni is asked to scooch to the left. She scooches to her right, which is the VIEWER'S left.

Leni, scooch to the left!

Leni is asked to scooch to the left. She scooches to her right, which is the VIEWER'S left.