Chairman of the Brawl 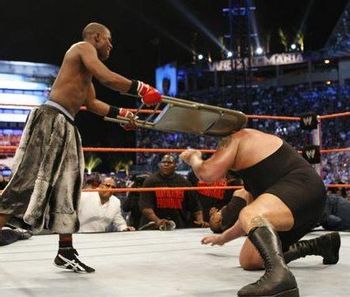 Take a seat.
"GIVE HIM THE CHAIR!"
Advertisement:

In fiction, chairs make for great bludgeoning objects capable of knocking people unconscious in one strike; enter the Chairman of the Brawl, that one guy who can be counted on grabbing the nearest sitting implement and smashing it across his unfortunate victim's head. If the chair is made of wood, it also immediately splinters into countless pieces to show how devastating the blow is.note These chairs are actually made of balsa and held together with toothpicks to break apart easier. Don't Try This at Home.

If there is a Bar Brawl going on, this is to be expected. Pretty much every single Western featuring a Bar Brawl, ever, has used this one, to the point of being a Dead Horse Trope.

A subtrope of Improvised Weapon and Wrestler in All of Us. Compare Batter Up! and Golf Clubbing. Not to be confused with Executive Suite Fight, although this trope could certainly show up there, too.