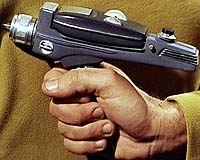 "I varn you, if you don't lie on the floor... I vill have to stun you."
Commander Pavel Chekov, Star Trek IV: The Voyage Home
Advertisement:

The phaser carried by Ensign Pavel Chekov in Star Trek: The Original Series. Completely unremarkable, and of no significance whatsoever, unlike Chekhov's Gun.