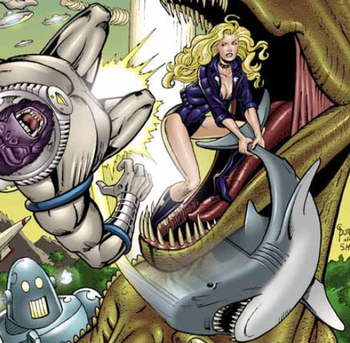 You'd need Jaws as a club to stop a space ape (and ward off disgruntled PETA members).
"You... you struck me with a bass!"
— Roger, American Dad! ("Frannie 911")
Advertisement:

A Sub-Trope of Grievous Harm with a Body, where the body being used is that of a fish or fish-shaped animal, like a whale or seal. Named after the orca Shamu,

famous for being exhibited in the San Diego SeaWorld park, and who died in 1971. Her fame led to the name being worn by several other SeaWorld orcas.

Why? Perhaps it's the vague club shape of the animal, since most uses of this involve swinging by the tail. However, the most likely reason is simply because it is so frikkin' awesome.

It should be noted that Artistic License – Biology really comes into play here. In fiction, not only do the creatures seem to not be affected by the force of the impact, they also don't seem to suffer much from being out of the water. And let's not even mention the fact that their spines can stand up to this abuse. Assuming the fish was alive in the first place, anyway; dead fish make equally effective clubs and can be readily purchased from fishmongers and seafood markets.

This action has received a word in English (unofficially): The verb "cornobble".

Note this is actually hitting something with a fish. If it's merely tossing the fish anywhere other than someone you intend to hurt, it doesn't count.

The only case where Everything's Even Worse With Sharks doesn't apply, it seems. Unless, of course, you're the one being cornobbled — on top of everything else, their skin is covered with tiny tooth-like "denticles" that give it a texture like sandpaper.

When the weaponized sealife in question is something like a swordfish, marlin, sawfish, narwhal or other animal gifted with a pointy horn or rostrum, and is specifically employed as a makeshift sword, see the Swordfish Sabre subtrope.

Compare Improbable Weapon User, Edible Bludgeon, Ninja Pirate Zombie Robot. Not to be confused with With This Herring.

This classic sketch from Monty Python speaks for itself: A dance that involves hitting one another with fishes.

This classic sketch from Monty Python speaks for itself: A dance that involves hitting one another with fishes.