Webcomic / Not Quite Daily Comic 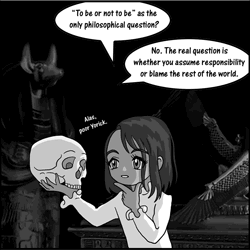 (not always SFW) is an Animesque Meta Life Embellished Webcomic that is also available in print. It focuses heavily on Parody, and Breaking the Fourth Wall. It advertises itself as plotless, but there have been several Story Arcs, interspersed with one-off "Intermezzo" episodes. Despite the presence of aliens, ninjas, sky pirates, zombies, demons, and magic, the Not Quite Daily Comic features very little conflict and instead concentrates on interpersonal relationships and philosophical questions.

The default setting appears to be Belgium, with occasional travel elsewhere.