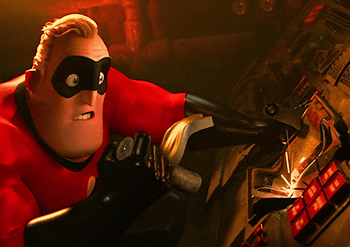 Textbook example of Broken Lever leading to Oh, Crap!.
Lev: Pull the lever!
AJ: [waving it in his face] THIS IS THE LEVER!!!
— Armageddon
Advertisement:

Someone breaks a lever, so whatever was controlled by it can't be turned off and it goes into overdrive. Likely to result in an Oh, Crap! moment for the culprit and/or witnesses.

Usually Played for Laughs as we watch the character trying to stop the runaway machine from wreaking havoc. This task is harder with No Off Button. Sometimes someone who Does Not Know His Own Strength will break at least one lever.