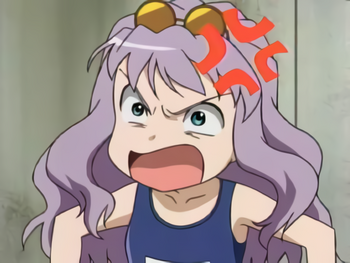 "Well, excuuuuse me!" said the princess.
"Val, you're scaring me! I can see the veins on your forehead."
— Victor, Victor and Valentino
Advertisement:

When angry or outraged, a cross- or Y-shaped intersection of veins never fails to appear on an anime character's forehead and/or fist.

Occasionally, if the character gets mad enough, extra popping veins will appear in the air around them. Of late, the veins have begun to turn into a symbol like the Sweat Drop, and as seen in the illustration to the right, no longer appear to be part of the character's body. Also, there are absolutely no regulations when it comes to the size of it.

It's effective in demonstrating the character is angry despite what other emotion they may be displaying, showing the character is putting on a facade to hide their anger. In certain instances, the veins can be a precursor to a Big Ball of Violence.

Usually limited to comedic anime, but some manga have started putting them in speech bubbles, and they have also appeared in anime-influenced Western animation.