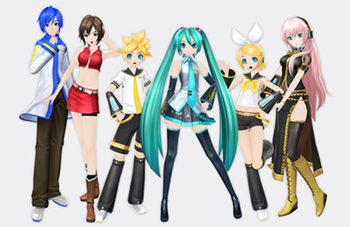 Hatsune Miku: Project DIVA is a series of Vocaloid-themed rhythm games released by Sega. As the title may imply, Hatsune Miku is front and center, although the other Crypton Vocaloids, Rin, Len, Luka, Meiko, and Kaito, get their share of the spotlight, as well.

The aim of the game is simple. Notes fly toward stationary targets on screen and you press their corresponding buttons when they overlap the markers. This task is spiced up by detailed, unique 3D music videos for each song, as well as quite frankly ridiculous bonus difficulties. When you're not engaging in the main game, you can participate in a variety of extraneous activities such as purchasing outfits, befriending the Vocaloids, or creating your own charts in Edit Mode.

The series has had a rather troubled relationship with non-Japanese regions, staying No Export for You for five years since the first game despite international popularity. This ceased when SEGA tested the waters with an online Facebook campaign for the series, as well as an English language demo for F at E3. Due to high turnout for the Facebook campaign signaling fan demand, the series finally made its way to English countries with the release of F in 2014 and has since maintained momentum among Western Vocaloid fans and more with subsequent successful localization of succeeding major titles.

See also Project SEKAI Colorful Stage! feat. Hatsune Miku, a mobile Spiritual Successor to the series made in collaboration with Colorful Palette and published by Sega, and featuring the Crypton Virtual Singers alongside an Original Generation of characters.