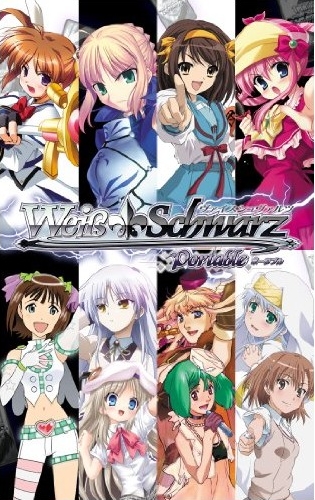 Japanese TCG primarily targeted towards the otaku market. Featuring various characters from all manner of anime and video games, the game essentially runs on Super Robot Wars logic, allowing players to pit their favourite characters and series in the Ultimate Showdown of Ultimate Destiny against each other. It was made by Bushiroad, the same company who made cute detectives, dat new card game, and a school idol mobile game.

Put simply, Weiss Schwarz is the Super Smash Bros. of anime, but in a card game format. Players construct decks featuring their favorite anime or video game and pit them against each other in head to head combat, summoning Characters to a Stage to do battle with each other. The ultimate goal is to force your opponent to reach Level 4 by dealing damage, which thus wins the game. Decks are divided into two sides: Weiss, which generally tends to represent anime series and visual novels, and Schwarz, which largely consists of video games and some Darker and Edgier anime series.

The series available in each side (in no particular order):

In addition, there is an extensive list of rules for the game:

The various areas in Weiss Schwarz is as follows:

A turn in Weiss Schwarz consists of several phases, in the following order: