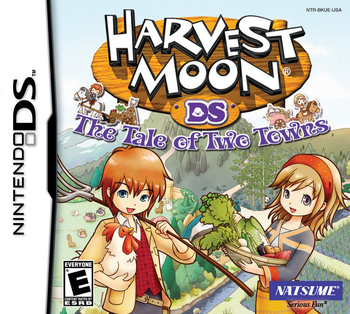 Harvest Moon: The Tale of Two Towns (牧場物語 ふたごの村 Bokujō Monogatari: Futago no Mura?, lit. "Farm Story: Twin Villages") is a 2010 installment in the Harvest Moon (now known as the Story of Seasons) franchise, released for the Nintendo DS and with additional features for the Nintendo 3DS.

The player character moves out of the city to start a new life on a farm, but finds themselves caught in the long-standing feud between the mayor of the European-styled, livestock-centered town of Bluebell and the mayor of the East Asian-styled, crop-centered town of Konohana. After choosing which town to live in, the player meets the Harvest Goddess, who started the whole feud years ago by blocking off the tunnel through the mountain that once connected the towns... because the mayors arguing prevented her from sleeping. She tasks the player with repairing the mayors' friendship and reopening the tunnel, as she can't be bothered to fix her own mistake.

The game's design continues where Grand Bazaar left off: greater scope and fluidity of movement as you explore the mountain (I.E. a lot of jumping and flipping), using your horse and carriage as portable storage, digging watering troughs to increase crop efficiency, alpacas, and some out-there transportation including an unlockable skateboard, snowboard, and a UFO cart. The game is primarily based around the two towns' request boards, where the player accepts jobs from the inhabitants, (Almost always Fetch Quests), and the four Cooking Festivals that occur every season, where the player's participation and success will increase the mayors' friendship.

The game was criticized for players only being able to dig through the tunnel, expand their farm, upgrade their tools, and unlock special items through the request board, as those requests only appear on the first day of each season. Due to the wide scope of expansions available for both farms individually and each of the upgradable tools, as well as the extended network of mines that can be dug out of the tunnel, this arbitrarily lengthens the game to several in-game years. Adding to this is the physical 3DS version's bugginess: it has a frequent tendency to fail to load the game's sprites and crash to the 3DS home menu, losing all progress for that day, and other times it can outright delete the save data.note This was fixed in the downloadable version from the Nintendo eShop