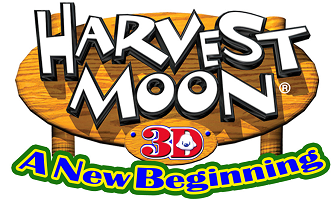 Harvest Moon: A New Beginning is a title in the Harvest Moon (now known as the Story of Seasons) series, and it is the last in the Bokujō Monogatari series to be localized by Natsume and released in the West under the series title. It was released in 2012 and is the first game to only be allowed on the 3DS.

You come to an old and dying village, with very few people left. The Establishing Character Moment for this whole town is in the first few seconds of the game when an old man, the mayor, collapses out of nowhere in front of you. Now, it's up to you to save this town, by completing Town Restoration Plans that the mayor gives you. You have to win festivals with high quality crops or animals, build things to decorate the town, and move some more people in to get this place going.

Along the way, like in most Harvest Moon games, you can get married and even have a kid. You can also have various kinds of animals, such as llamas, sheep, alpaca, chicken, silkies, and more on your farm.

After this game, Marvelous transferred localization rights to their Western subsidiary, XSEED Games. Because Natsume still owns the rights to the name Harvest Moon, future Bokujō Monogatari games are released under Story of Seasons, while Natsume develops and releases their own games under the Harvest Moon banner. The first Story of Seasons game picks up its design from where A New Beginning leaves off.