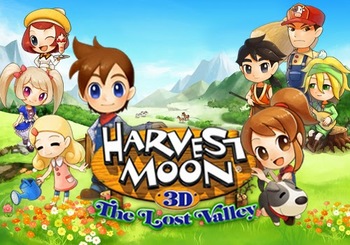 Harvest Moon: The Lost Valley is the first Harvest Moon title created by Natsume, in conjunction with Tabot. It was released on the Nintendo 3DS in America in 2014, and in PAL regions the following year.

The creators of the original Harvest Moon (Bokujou Monogatari in Japan) series decided to translate the games in-house with XSEED Games starting with Story of Seasons. They left Natsume with the Harvest Moon name but no games to go along with it. As Harvest Moon made up most of their revenue, Natsume decided to make their own Harvest Moon titles instead.

The game starts with the protagonist arriving in Lost Valley. Unfortunately, you become caught in a blizzard when you arrive. A mysterious voice encourages you to seek refuge in a nearby cabin and that night, you dream of a strange blue-haired woman who asks you to help her. In the morning, you wake up a voice coming from a pile of snow. After you help the trapped sprie, you learn that the beautiful Lost Valley has become trapped in an eternal winter. Only you can help return the natural flow of the seasons back to Lost Valley.

Like most Harvest Moon titles, you play as a farmer. The main objective is to save the valley while working on your farm. You can also get married and have children. Your farm animals are limited to chickens, cows, sheep, and a rideable horse, however there are up to 30 different personality traits that the animals can have. Different traits cause different side effects. The game also has 100 different types of crops to grow.

The mobile game Harvest Moon: Seeds of Memories features the same art-style and characters, but a different plot and a few characters also have different roles.