An Interior Designer Is You 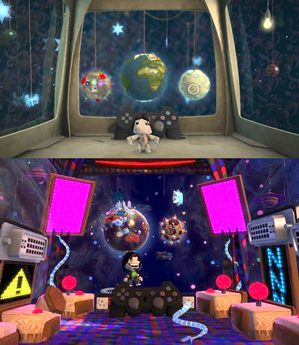 You should see the pool.
"You earn money, but the only things to spend it on are refueling every hour or two and buying entirely-cosmetic furniture to fill the apartment you visit like three times in the course of the game, so it's either pointless or an unsubtle satire on modern living."
— Zero Punctuation on Cloudpunknote You can also buy clothing and not-really-neccessary car upgrades. Which maybe works as a continuation of said satire.
Advertisement:

So, you're playing a videogame, and you have your Player Headquarters. It could be a house. It could be a military base of some kind. And, you know, it's a nice place. Well, OK, the walls are kinda brown and boring. And except for the conference table, it's kinda empty. And maybe the carpet could use some scruOHMYGOD! This room needs a makeover STAT!

Luckily, this isn't hard. Why? Because An Interior Designer Is You!

In some games, you'll get a room (or two, or three) that you can kit out as you see fit. You can collect furniture and other decorations, put them up in as weird a combination as you please, and just generally customize your space. Sometimes, you only have a few different decoration options, and you can only change the "style" of items. Other games give you complete freedom to place items.

Compare Virtual Paper Doll, An Entrepreneur Is You, Renovating the Player Headquarters, and And Your Reward Is Interior Decorating.

Alternative Title(s): An Interior Decorator Is You