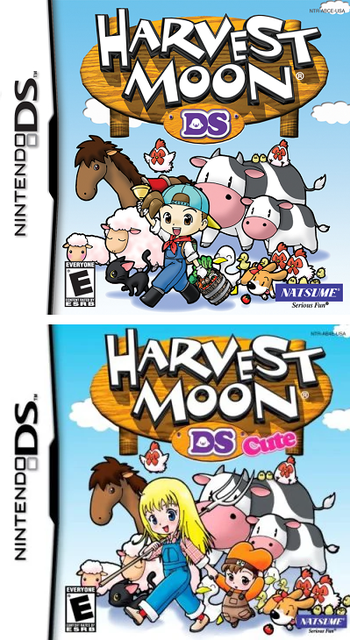 Harvest Moon DS was the first Harvest Moon (now Story of Seasons) game to be released on the Nintendo DS in 2006. The game can be summed as A Wonderful Life meets Friends of Mineral Town.

The game takes place a century after A Wonderful Life, where we cut in a feud between the Harvest Goddess and the Witch Princess. One day the Witch Princess had accidentally turned the Harvest Goddess into stone, and then making things worse by making the Goddess and the Sprites disappear. Since you just happen to be around, she then recruits you to save her by finding the Sprites.

In 2007, DS Cute was released. It is like the main game, but you play as a girl and a lot of the Game-Breaking Bugs got patched. The plot had been changed to the Harvest Goddess turning to stone after calling the Harvest King a "baldy" from a heated argument when she dismisses you as being lazy (It doesn't help her case since she shows up late at night, and you are asleep.)

The following Tropes apply for this game: