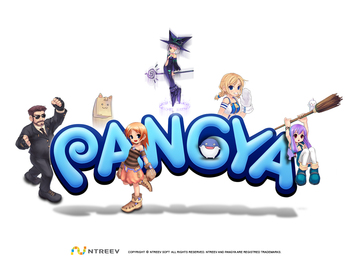 A Korean Animesque Massively Multiplayer online golf game with RPG elements, one of which is an RPG (in this case Rocket Propelled Grenade) golf ball. Presently, the major servers for the game are located in Korea, Japan, North America (USA), and Europe.
Advertisement:

The game takes place on Pangya Island, a fantasy world which once came under the assault of the Dark Lord, who tried to drain the power of life out of the island/world through a magical barrier. There was one small hole in the barrier, through which the energy was being drained, and the island's sages discovered that a ball of magic directed into that hole could break the barrier. Unfortunately, the ball couldn't be handled directly after it was made - you could hit it with a stick, but every hit would weaken its power. Ultimately, a hero from the "real world" Earth succeeded at accomplishing this feat, and the Dark Lord was defeated.

The game played in honor of that struggle and victory is called Pangya, and players are invited from Earth as well since that's where the hero came from.

Tecmo published a port of the game for the Nintendo Wii, which was titled Super Swing Golf for American release, and removed the "Massively Multiplayer" part from the game, making it a standalone game that anyone can play alone or in local multiplayer. Story modes are introduced and each character model got their own personalities. A sequel followed along similar lines. A PSP version also exists, published by Tomy as Pangya: Fantasy Golf. This version expands massively on the storyline, personalities, and playable cast, making a number of the MMO/Wii caddies playable as golfers and adding a few original characters on top of that - at the cost of the newest MMO character and about a third of the courses.

Being an old MMO launched in 2004, most of the servers closed down already in the new 10's. The Brazilian server was the first one to close, early in 2007 because the game company who brought the rights to run it in the country was struggling with the costs of running it. In 2016 the major servers were closed, starting with the original Korean one in August. In the same month the SEA (or Pangya South East Asia) servers closed. In December 16th, 2016, Pangya's global version closed its doors. In 2017, the Japanese server which had a lot of exclusive content (including a new course) ended too. Starting 2018, the Thailand server is the only official server alive. But, now, a team of die-hard fans have brought the game back with an unofficial private server known as Pangya: Celebrity