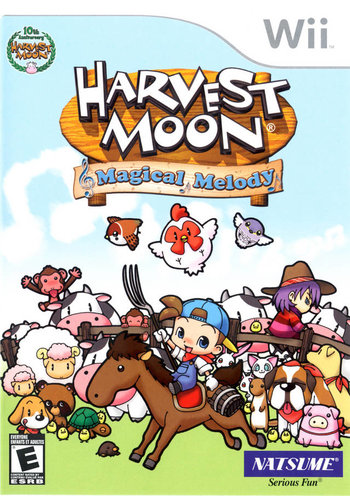 Harvest Moon: Magical Melody is a game in the Harvest Moon (now Story of Seasons) series, developed by Marvelous Entertainment and translated by Natsume in North America and Rising Star Games in Europe. It was released for the Nintendo GameCube in Japan in 2005, and in America in 2006. A Wii port was developed for the European release in 2008, and was released in America in 2009.

Magical Melody, like most other games in the series, is a farming Simulation Game. It features many characters from the original SNES game and Save the Homeland, all re-deformed into the cartoonish, child-friendly art style of the early games.

The central location is Flower Bud Village, a small town with a few shops that finds itself in need of new blood. To this end, it advertises the Exciting Ranch Plan, a plan for aspiring farmers to move to town, purchase land, and start their own farm. Enter the player character, who moves to town to start a new life.

Not too long after, the player runs into a trio of Harvest Sprites, all of whom are quite surprised that they can see them. The Sprites enlist the player's help to rescue the Harvest Goddess, who has turned to stone out of despair at the unkindness of the world. To save her, the player must collect 50 musical notes, which are granted for various tasks or life events such as attending festivals, getting married, or doing a certain number of a job (like chopping wood or pulling weeds). However, the player isn't the only one collecting the notes; another farmer, Jamie, also wants to save the Harvest Goddess, and seems unusually determined to do it alone.