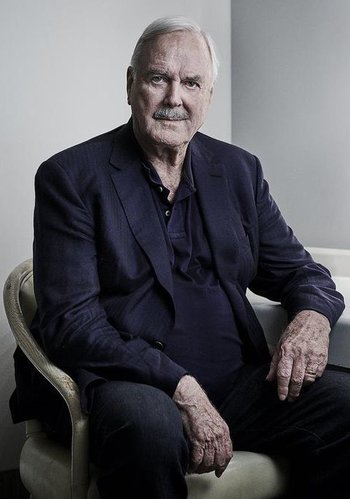 "And now for something completely different…"
"John Cleese is very, very tall. He also has a very Silly Walk."
—TeeVeePedia article on John Cleese
Advertisement:

John Marwood Cleese (born October 27, 1939 in Weston-super-Mare, England) is a British actor and screenwriter. He is most famous for his work in Monty Python, where he often played authority figures and yelled a lot. His leaving the show before the fourth season is widely seen to be the moment when it Jumped the Shark. Beyond that, he, along with his then-wife Connie Booth, created and starred in Fawlty Towers, co-wrote and starred in A Fish Called Wanda, helped write the Superman Elseworld Superman: True Brit, made cameo appearances all over the place, and gave a rather famous eulogy

He is the straightest Straight Man possible without having to resort to Asimo or attaching girders to one's back. Except when he's playing a raving lunatic. Although even then he manages to be the straightest raving lunatic you've ever encountered (see Basil Fawlty and Tim the Enchanter).

Ooh, ooh, I see. Going to another page, eh? YOU YELLOW BASTARDS!! Come back here and read the article again! I'll bite your legs off!!
Feedback