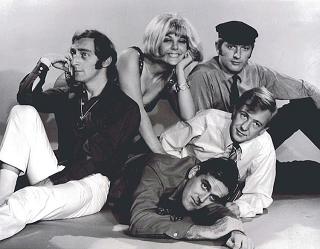 At Last the 1948 Show is a sketch comedy series that ran on ITV for 13 episodes in 1967 and 1968. It starred Tim Brooke-Taylor, Graham Chapman, John Cleese, Marty Feldman, and Aimi MacDonald. It is generally regarded, alongside Do Not Adjust Your Set and How To Irritate People, as being one of the three spiritual predecessors of Monty Python's Flying Circus. Most of the series was lost for decades; fortunately, almost all of the missing footage has since been found, and it's all been released on DVD.

Two sketches from the series are particularly well-known, having gained wider fame through being recycled by Chapman and Cleese for Monty Python:

So that was At Last the 1948 Show. And you try telling the young people of today that, and they won't believe you.