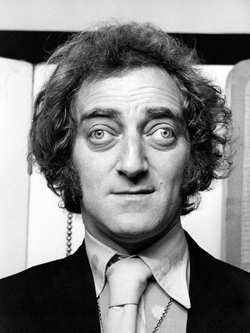 Martin Alan "Marty" Feldman (8 July 1934 – 2 December 1982) was a Fish-eyed British comedian and actor, best remembered now as Igor from Young Frankenstein. Often worked with Mel Brooks. He had previously worked as a scriptwriter on several radio and TV shows before being persuaded to appear on At Last the 1948 Show. No, he's not related to Corey Feldman.