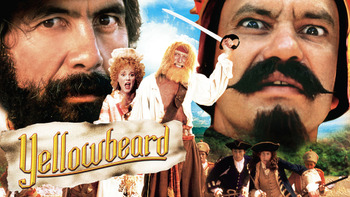 In the 17th century, the pirate Yellowbeard was incarcerated for twenty years for tax evasion — apart from his years terrorizing the high seas. He survives the sentence without disclosing the whereabouts of his vast treasure ("...in spite of twenty years of rehabilitation. And torture."). The Royal Navy hatches a plot to increase his sentence by one hundred and forty years, knowing that he'll escape in a rage to set out for his treasure. This he does, recruiting a motley crew of companions. He left a map of the treasure in the chimney of his wife's pub, but she burned it — however, she also had it tattooed on their son's head. Things go wrong when his former shipmate-turned-traitor Bosun Moon's press gangs take over their ship. With the head of the Secret Service hot on their trail they eventually find the island, where a group of AWOL Spanish conquistadors have taken residence with their ill-gotten gains, and the battle for the treasure commences...