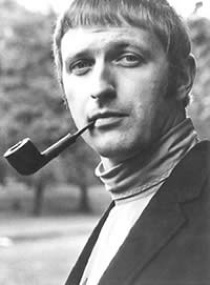 The Ex-Python.
"All ideas come about through some sort of observation. It sparks an attitude; some object or emotion causes a reaction in the other person."
Advertisement:

Graham Arthur Chapman (January 8, 1941 - October 4, 1989) was an English comedy writer and actor known for his work with Monty Python. Fans will recognize Chapman from his roles as King Arthur in Monty Python and the Holy Grail and Brian in Monty Python's Life of Brian, as well as his involvement in countless now-classic sketches in Monty Python's Flying Circus. Alongside John Cleese (his long-time collaborator, whom he met at Cambridge), Chapman co-wrote "The Parrot Sketch", one of the most beloved comedy routines in British culture, if not the English language as a whole. Cleese recalls that Graham would sit silently through long writing sessions, before suddenly introducing an idea so absurd that it changed the course of the sketch i.e. changing the defective appliance to a dead parrot, and deciding that it's a "Norwegian Blue". While not exactly the easiest person to work with, Cleese and the other Pythons all acknowledged that Chapman had a great instinct for what made something funny - or even funnier. Somewhat counter-intuitively, one of his most memorable characters was that of an Army Brigadier who cut narratives short for being "far too silly".

Chapman was a fully-qualified Doctor of Medicine, which (like many of his fellow Pythons) made him vastly over-educated for his primary line of work.note On at least two Python movies, the producers eased the budget by having Chapman double up as on-set doctor on call so as to meet a necessary regulation that every major film set should have a qualified medical doctor in case of accident or emergency He was also an alcoholic, and ultimately gave up drinking in 1977. During the seventies, he was one of the first major celebrities to come out of the closet as gay, and spoke openly for LGBT rights for the rest of his life.

Chapman died of throat cancer in 1989, the day before the 20th anniversary of the first broadcast of Flying Circus (Terry Jones called this "the worst case of party-pooping in all history"). His memorial service can be found on YouTube; emotionally fragile Tropers who love Python would do well to avoid the video altogether. Despite turning his funeral into a celebrity roast, which the Pythons all insist he would have enjoyed right down to John Cleese saying "good riddance to him, the free loading bastard", some sources note  Michael Palin's published diary confirms this claim that Cleese was deeply saddened by Chapman's death and had to be escorted out by hospital physicians when he passed away. May he rest in peace.

Graham Chapman is known for the following works:

On second thought, let's not go further into TV Tropes. It is a silly place.
(Right...)
Feedback

Example of:
Only a Flesh Wound