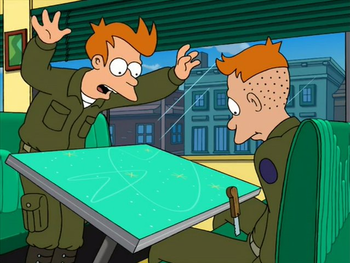 Fry: You almost got neutered!
Enos: Well, t'ain't as bad as gettin' killed.
Fry: For me it is!
"That could have been worse!"
— Toby (taking this trope philosophically), Scorpion, "Extinction"
Advertisement:

Now that was close! This trope describes circumstances where the narrow aversion of a Groin Attack is Played for Laughs.

This usually happens when a male character is on the floor, scooting backwards away from some kind of disturbance. Suddenly a piece of debris or similar hits the ground between his legs, right where the family jewels were located mere seconds ago. Our hero will then usually display an Oh, Crap! expression, inviting the viewers to share both the male pain and the male relief.

As well as being (obviously) an aversion of Groin Attack, this trope is sister to William Telling. Can also overlap with Knife Outline, where sharp objects will hit a wall around a character's body, pinning them by their clothes. Often the final object will land disturbingly close to a character's crotch. The unfortunate male checking himself afterwards is a Testes Test.

Puss jumps over a spire, narrowly managing to clear it.

Puss jumps over a spire, narrowly managing to clear it.