Film / How To Irritate People 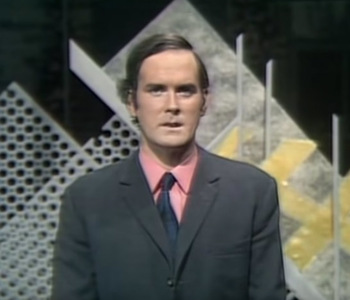 "Now, a truly excellent way to irritate any hardcore fan of television is to refer to this as Monty Python's How to Irritate People. This of course will result in a twenty-minute lecture about how Tim Brooke-Taylor was never a member of Monty Python."
Advertisement:

How To Irritate People is a one-off 1969 TV special hosted by John Cleese, co-starring Graham Chapman, Michael Palin, Tim Brooke-Taylor and Connie Booth, and produced by David Frost, with Marty Feldman co-writing and also having a small cameo. It features Cleese giving the audience invaluable advice on how to truly irritate others, with various sketches helping to prove his point. It was actually produced first and foremost for the North American market, but aired in a slightly edited form in the UK shortly thereafter.

This is the final entry in what is often referred to by fans as the "Proto-Python" era, with the overall style of humour beginning to more closely resemble that of Monty Python's Flying Circus, Michael Palin having joined the group, and At Last the 1948 Show leading lady Aimi MacDonald no longer being present. In fact, many of the sketches seen here would later be recycled for Flying Circus — the "Silly Job Interview" sketch was transplanted near-verbatim, while a sketch involving a used car salesman would be retooled into the legendary "Dead Parrot" sketch, and another one involving a self-flagellating Indian waiter was retooled into "The Dirty Fork". Some other mainstays of Python's humour also got their introduction here, most notably the old ladies referred to as "Pepperpots".