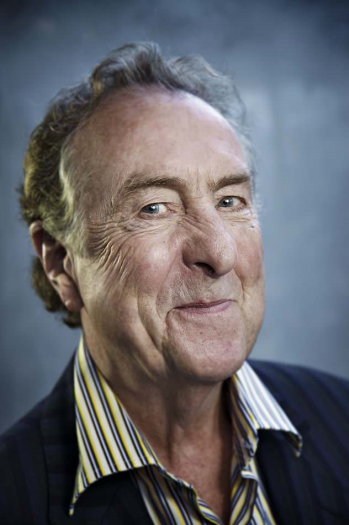 "And now for something completely different."
"I never think in terms of target audience. I try to write what makes me laugh, so I'm the target audience. I guess I just hope there's another person in America like me."
Advertisement:

Eric Idle (born 29 March 1943 in South Shields, England) is a British actor, comedian and screenwriter, best remembered as a member of Monty Python, though he has also written and acted in other projects, such as The Rutles.

Within Monty Python Idle was the only member who worked alone.note Terry Gilliam doesn't count, since his primary role was the animations. All the others wrote in duos, but he always preferred working independently and didn't mind learning a lot of dialogue for it. He often played reporters, naïve innocents or cheeky bastards. Some of the most popular Python sketches have him in it, including "Nudge Nudge". Idle is also an accomplished singer-songwriter and wrote many of the group's songs together with Neil Innes (The Bonzo Dog Band). Their Signature Song, "Always Look on the Bright Side of Life", originally from Life of Brian, was written and sung by Idle.

Idle's most succesful non-Python projects have been the comedic TV series Do Not Adjust Your Set, Splitting Heirs, Rutland Weekend Television and the spin-off The Rutles and the comedy film Nuns on the Run. Apart from that he appears a lot in Celebrity Cameo roles in American films and sitcoms, including Frasier, Suddenly Susan and Declan Desmond in The Simpsons. He also wrote a SF comedy thriller called The Road to Mars.

Idle also wrote the successful stage musical Spamalot, a cash-in on Monty Python and the Holy Grail, which has sold a lot of tickets all across the world, but at the same time received criticism for "selling out", not the least among some of the other Pythons. At least Idle lampshades this image too. One of his Turn of the Millennium concert tours was called Eric Idle Exploits Monty Python, and another was The Greedy Bastard Tour.

The standard IDE for the programming language Python, IDLE, was named after him.

Books and other writings

Does this site have any pages about pointed sticks?
SHUT UP!!