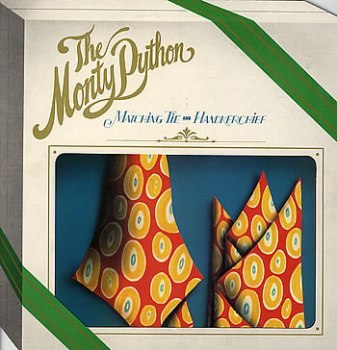 The Monty Python Matching Tie and Handkerchief is the fourth studio album by Monty Python, released in 1973. The LP version is famous for the fact that it was mastered with two concentric spiral grooves on Side Two rather than one, so that the one that would play when the needle was dropped was completely unpredictable. So in that sense it's a "three-sided album". To add to further confusion both sides of the LP were labelled as "Side Two", with only the matrix numbers identifying which are the first and second sides. The CD version, unfortunately couldn't pull off this gimmick and thus it merely puts all the tracks after one another.

Many sketches premiered in the TV series Monty Python's Flying Circus, but some have been shortened or lengthened and/or have a few lines that are different from the TV versions. There is also new material. The album is very sketch heavy, with hardly any songs, among which "The Philosopher's Song" is the most well known.

Extra tracks on the CD

Tropes appearing on Side Two of Side Two: