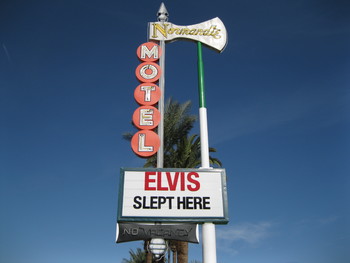 Sometimes it's a President. Sometimes it's a King.
"Abe Lincoln never slept here—but YOU can!"
— A billboard advertising a hotel on Kentucky's Interstate 65, the "Abraham Lincoln Memorial Expressway"
Advertisement:

On Bob and Alice's roadtrip, they come along an old roadside manor. In front of it, they see a sign saying, "George Washington Slept Here"! How exciting!

This is when an old inn, manor or other tourist attraction was once used by someone famous and usually dead. Whether or not this is actually true is generally only addressed if it somehow becomes relevant to the plot, ie if the celebrity in question might have hidden a Plot Coupon or MacGuffin there. Could also be anything from an outhouse to a gas station.