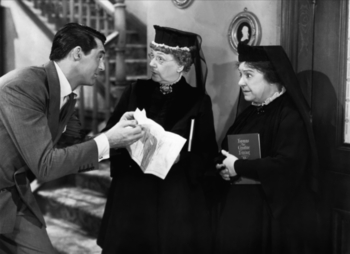 "There is a Happy Dale, far, far away..."
Mortimer: Look, you can't do things like that! Now, I don't know how I can explain this to you. But, it's not only against the law, it's wrong!
Martha: Oh, piffle!
Mortimer: It's not a nice thing to do. People wouldn't understand. He wouldn't understand! What I mean is... Well... This is developing into a very bad habit!
Advertisement:

Arsenic and Old Lace is a 1939 play by Joseph Kesselring, a Black Comedy parody of murder mysteries. It was adapted for the big screen as a 1944 film directed by Frank Capra and starring Cary Grant, Raymond Massey, and Peter Lorre.

Theatre critic Mortimer Brewster doesn't realize it, but he is the most normal member of his family. He has two sweet old aunts, Abby and Martha, who like serving homemade wine to lonely old men... and sometimes put arsenic in it. As the action opens, Mortimer has decided to surprise his family with his marriage, and shows up with his new bride Elaine at his aunts' house in Brooklyn.

Unfortunately, no sooner is he ensconced in their parlor than Mortimer accidentally uncovers the dark secret of the Brewster insanity. Since all, or almost all, of the bad things his family does are directly related to hereditary madness, Motrimer has to try to keep them out of trouble even as "Yellow Fever victims" start piling up in the basement, buried there by his blatantly insane older brother Teddy (who strongly resembles, and thinks he is, the late President by that name).

Trying to keep his bride Elaine in the dark while also keeping her safe, Mortimer stuffs her back into her old room in her father's home next door. Then his other older brother, Jonathan, returns after a long exile and some plastic surgery... and things get truly dangerous.

The film and play contain examples of the following tropes: