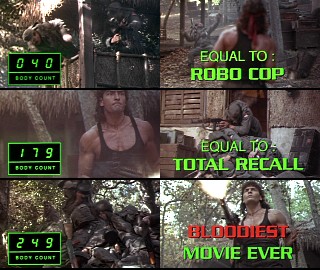 This movie "must have killed more men than Cecil B. DeMille".
Riddick: Remember that favorite game of yours?
Kyra: "Who's the Better Killer?"
Riddick: Let's play.
— The Chronicles of Riddick
Advertisement:

Both fiction and real life have massive battles between enormous armies consisting of thousands of soldiers. Such a battle will invariably result in obscene amounts of bloodshed, carnage, death, slaying, maiming, slaughtering, stubbing of toes, and generally any other word for mass killing you can think of. In the middle of it all will be these guys making sport of it, it's a must for Blood Knights, and/or Psychos For Hire who want to outcompete each other.

They may be best friends or bitter rivals, or any other kind of relationship. One of them may propose a contest to see who's better. See which one of them can kill the most of the other side's Mooks. Right before a huge battle, or during one, they agree that whoever kills more Mooks is officially the better fighter, and has superior combat skills. The level of hostility in the challenge can vary from a friendly jest between comrades to the participants trying to kill each other as well during the ensuing ruckus.

It can also be done when the two are simply infiltrating an enemy base by themselves or fending off a horde of enemies that ambushed them. It is a frequent subject of mini games and contests between players in certain video and tabletop games.

Compare Back-to-Back Badasses, which may very well happen during the fight.

Mind that Sarge's body count up to that point is effectively zero.