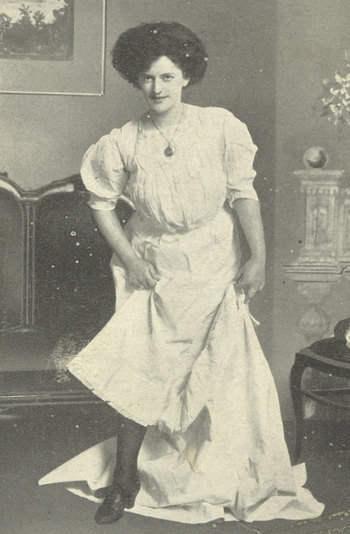 The Belle Was Slowly Pealing, 1908
"In olden days a glimpse of stocking
Was looked on as something shocking
But now, God knows — anything goes!"
— Cole Porter, "Anything Goes"
Advertisement:

If a show or movie is set in the 1800s or early 1900s, or makes references to that era, expect mention of The Ankle Taboo: A display of bare ankle will be referred to as pornography, and the sight of one will induce much shock, scandal and monocle-popping. Other times, "can't show your ankles" will simply be used as shorthand to sum up all of the repressiveness of that era.

While it's often Played for Laughs, the amount of historical truth behind this trope is dubious for multiple reasons:

Note that a lot of things we tolerate today were severely frowned upon in those days (and vice versa), but the exposed ankle is probably one of the easiest, quickest, and (in 21st-century culture) silliest examples of Values Dissonance that a show can portray, and thus works best for a quick gag.

A subtrope of Fully-Clothed Nudity and Our Nudity Is Different. See also Changed My Jumper for when this comes into play with time travelers.