"Each man kills the thing he loves!" 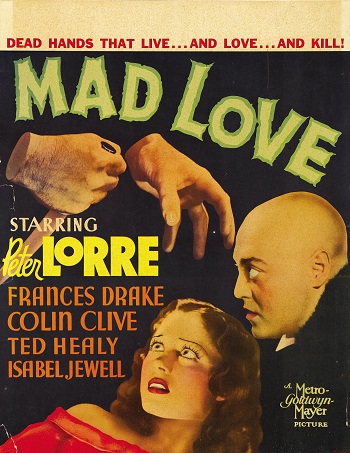 Lorre is Dr. Gogol, a super-creepy Paris surgeon—it turns out that Peter Lorre got even creepier if you made him bald. Dr. Gogol is a big fan of the "Théâtre des Horreurs", a theater troupe that stages horror shows (patterned after the Real Life Grand Guignol theater). Specifically, he is an obsessive, stalkerish fan of lead actress Yvonne Orlac (Frances Drake). Yvonne is clearly creeped out by Dr. Gogol, and even if she weren't, she's already married, to English concert pianist Stephen Orlac (Colin Clive, best remembered for playing Victor Frankenstein in Frankenstein and Bride of Frankenstein).

The Orlacs' happiness is ruined when Stephen, coming back to Paris after a concert tour, is in a train wreck that smashes both of his hands. A desperate Yvonne goes to Dr. Gogol, who performs a hand transplant surgery. Unfortunately for Stephen, the donor hands come from a convicted murderer. Things do not go well.

Mad Love was the tenth and last film directed by Freund, who spent the bulk of his career as a very famous, award-winning cinematographer. It was the first American film for Lorre, who had fled Nazi Germany in 1933 and acted in England and France for a while. It is an adaptation of the short story "The Hands of Orlac", which had been previously made in 1924 as The Hands of Orlac with Conrad Veidt, and was filmed for a third time in 1960 as The Hands of Orlac with Christopher Lee. Keye Luke from the Charlie Chan films plays Gogol's assistant.

Not to be confused with the trope named Mad Love, which is used in this film, or the 1995 film of the same title starring Drew Barrymore and Chris O'Donnell.