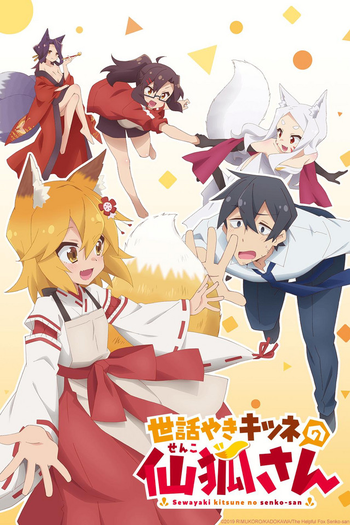 Kuroto Nakano is just your average Japanese office worker—stuck in an exploitative company that puts far more work on him than is reasonable, safe, or even sane, putting in such long hours he has no time for relaxation or socialization with friends, and finally going home alone to his apartment at the dead of night.

His situation has gotten so bad that a dark, ominous miasma has begun to leak out from him, so large his suffering and stress spreads to other people and makes them miserable just by being near him. Such a life is unsustainable, the key to an early grave if he doesn't change things soon, but what can one man at the end of his rope do...?

Accept the pampering and care of a compassionate kitsune demi-goddess, that's what!

The Helpful Fox Senko-san (Sewayaki Kitsune no Senko-san) is a slice-of-life manga by リムコロ ("Rimukoro"), featuring the daily life of Nakano and Senko doing most everything she can to make it easier, providing help in the form of doing his chores for him, keeping him company, or (once per day) letting him touch her fluffy tail. While everything starts off simply enough, matters get more complicated as more individuals both mortal and semi-divine barge into their lives...

Debuting in October 2017, the manga is currently ongoing, published in Comic Newtype. A 12-episode anime adaptation by Dogakobo aired for the Spring 2019 season and was dubbed by FUNimation.

Thanks for all your hard work today. Sleep well.