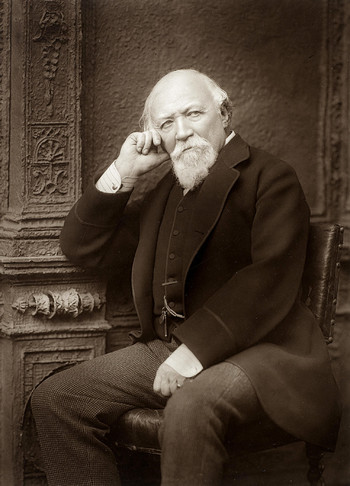 In one year they sent a million fighters forth
South and North,
And they built their gods a brazen pillar high
As the sky
Yet reserved a thousand chariots in full force—
Gold, of course.
O heart! oh blood that freezes, blood that burns!
Earth's returns
For whole centuries of folly, noise and sin!
Shut them in,
With their triumphs and their glories and the rest!
Love is best.

Robert Browning (7 May 1812 – 12 December 1889) is one of the best-known and best-regarded poets from Victorian Britain.

Browning was born in Camberswell, England, the child of a family of well-to-do abolitionists. His father had a library of some 6,000 books that influenced Robert's literary development. At the age of 12, he wrote his first collection of poetry, which he later destroyed. His parents were technically gentlefolk, who had inherited much land in slave plantations in the West Indies, but his father worked as a clerk rather than profit from slavery. Browning followed his parents' noble example by living at home and staying completely dependent on them until he was thirty-four. "Pauline, a fragment of a confession" was self-published (paid for by his aunt) in 1833. Paracelsus, about the 16th century scientist

, was published in 1835, and was his first work to gain notice in the London literary scene.

In 1844 Robert Browning wrote a fan letter to Elizabeth Barrett, who at the time was a much better-known poet than he was. A mutual friend introduced them in 1845, and a romantic courtship followed, complete with forbidding father and clandestine elopement. Barrett's most famous work, Sonnets from the Portuguese, and its very famous Sonnet 43 ("How do I love thee? Let me count the ways.") is about Robert Browning. Elizabeth Barrett and Robert Browning were married in 1846 and were together until her death in 1861. In the years after Elizabeth's death, Robert's reputation as a poet, once a distant second to hers, took off. Browning continued to be active as a writer right up until his death in 1889.

Robert Browning works with their own pages:

Depictions of Robert Browning in fiction: