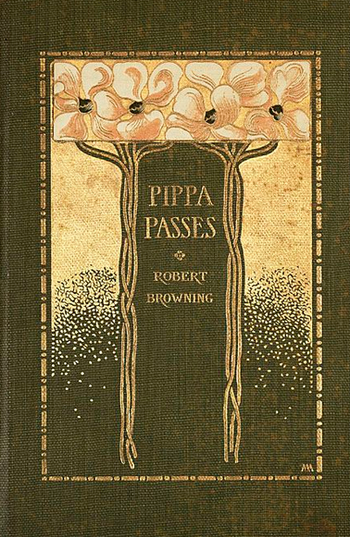 "God's in his Heaven
All's right with the world!"
Advertisement:

Pippa Passes is an 1841 verse drama by Robert Browning. The poem describes a single day in the life of Pippa, a young silk-winding girl who goes for a walk through the town of Asolo, Italy. Pippa is happy and innocent and cheerful, attributing goodness and decency to all the people she passes—but as the poem demonstrates, the people of Asolo are far darker and more complex than innocent Pippa might have guessed. She sings of "Asolo's Four Happiest Ones", namely Ottima, wife of Luca the silk-mill owner; Jules, a French art student who is getting married that day; Luigi, an Italian patriot who lives with his mother on the hill; and Monsignor, a cleric.

Pippa Passes was first published as part of the Browning collection Bells and Pomegranates, which also included "The Pied Piper of Hamelin" and other memorable Browning works such as "Porphyria's Lover" and "My Last Duchess". It marked his arrival on the British literary scene. Being a drama written in verse, it has been performed on the stage on multiple occasions. A 1909 short film adaptation, directed by D. W. Griffith, was the first film to ever get a review in the New York Times.