Literature / The Picture of Dorian Gray 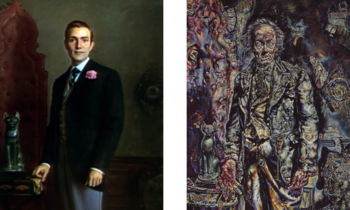 Dorian Gray's portrait, before and after
"How sad it is! I shall grow old, and horrible, and dreadful. But this picture will remain always young. It will never be older than this particular day of June.... If it were only the other way! If it were I who was to be always young, and the picture that was to grow old! For that—for that—I would give everything! Yes, there is nothing in the whole world I would not give! I would give my soul for that!"
— Dorian Gray, looking at his portrait
Advertisement:

The Picture of Dorian Gray (1890) was Oscar Wilde's only novel, naturally rife with witty banter and homo-eroticism. Blond, beautiful Dorian is The Muse for the talented artist Basil Hallward. Dorian, gifted with incredible beauty, is a thoughtless and happy young man until the day that he comes to Hallward's house to see the unveiling of the artist's latest masterpiece — the eponymous portrait. There, he meets Lord Henry, who with a few casual words, instills the fear of aging and decrepitude into Dorian's young, impressionable heart. Dorian is greatly troubled, and when Basil brings the portrait out and unveils it, its beauty hurts Dorian so much that he exclaims he would sell his soul for his painting to age in his place.

From that day on, Lord Henry, rather than the adoring Basil Hallward, becomes the driving force in Dorian's life, leading him down a path of sensuality and pleasure. Dorian begins to notice, after he cruelly rejects the young actress who has fallen in love with him, that his portrait changes — a dark smirk comes over the once innocent smile, just to begin. Years pass. The portrait grows older. Dorian does not.

This story was used as evidence against Wilde and resulted in him being prosecuted for homosexuality and sentenced to two years hard labor.

Wilde's novel has been adapted for film, television, and stage at least two dozen times. One of the most famous adaptations is a 1945 film directed by Albert Lewin that starred George Sanders as Lord Henry, Hurd Hatfield as Dorian, Donna Reed as Basil's niece Gladys (a wholly different character in the film), and 20-year-old Angela Lansbury as Sibyl Vane. The 2009 film Dorian Gray starred Ben Barnes in the title role and Colin Firth as Lord Henry. Tropes for these films should go on their own pages.

Tropes in adaptations include: