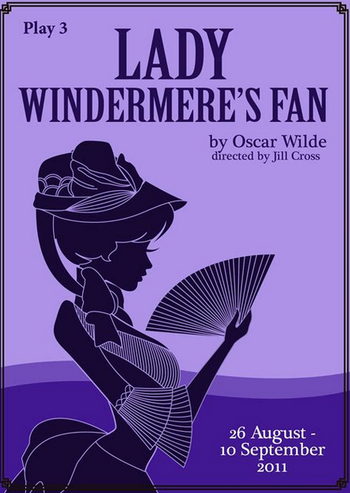 Lady Windermere's Fan: A Play About a Good Woman is a 1892 comedy by Oscar Wilde. The play is a comedic satire. It has been made into numerous films, including a 1925 film that was directed by Ernst Lubitsch, a 1949 film directed by Otto Preminger titled The Fan, and a 2004 adaptation that was renamed A Good Woman, set it to 1930s Italy, and starring Helen Hunt as Erlynne and Scarlett Johansson as Windermere.

Lady Windermere suspects her husband may be having an affair, based on the gossip of neighbours and her discovery that he has been paying large sums to a Mrs Erlynne. Having had enough, she finally leaves him in anger after he invites Mrs Erlynne to her birthday ball. Mrs Erlynne follows her to the house of the man who propositioned her, Lord Darlington, who is absent. The two women have a heart-to-heart, and all is not as it seems. Suddenly, a group of men, including Lord Windermere, arrive, forcing the two women to hide. Unfortunately, Lady Windermere has left her fan on the table for her husband to find...