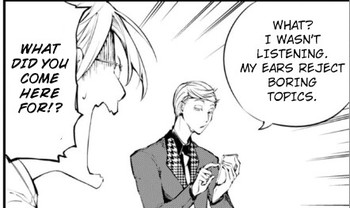 Lord Sandwich: I do not know whether you will die on the gallows or of the pox.
John Wilkes: That will depend, my lord, upon whether I embrace your principles or your mistress.
Advertisement:

The Gentleman Snarker is a type of Deadpan Snarker that can say ungentlemanly things as only a gentleman can. This should not be considered the exclusive domain of males, because the Ladies can be just as cunning, and just as well-bred/rich. This trope is about any upper-class person who is exceptionally witty.

They are always polite, except when it is appropriate to be impolite. At that moment, they can deliver their victim an insult as sharp and subtle as a rapier. They spend their time making witticisms, flirting and pulling pranks. This characteristic is well known among those with a Stiff Upper Lip and when done right can be quite awesome. Beware the Gentleman Snarker. If you want your pride punctured, they're the one to do it. This was once almost a necessary part of being a high-class person and thus political insults of the past were just as common but at least more interesting.

They may apply Sophisticated as Hell, often sparingly. See also Servile Snarker — though due to Conservation of Competence, one is rarely in the employ of the other. Put two of them in a room together, and Snark-to-Snark Combat becomes almost inevitable.