Theatre / The Moon is Blue 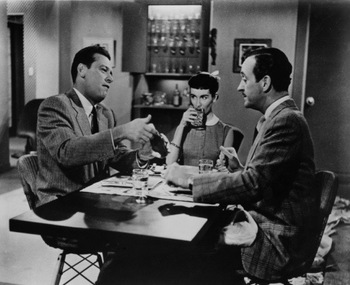 The Moon is Blue is a Romantic Comedy play that was adapted into a film, both written by F. Hugh Herbert.

The story begins with the meeting of two New Yorkers: Donald Gresham, an independently employed architect who owns five acres in Maine, and Patty O'Neill, an Irish-American aspiring actress. Don and Patty first notice each other in a drug store, and — after following her up to the observation deck of the Empire State Building — he invites her over to his East 49th Street apartment for a drink. She accepts, on the condition that he refrain from making passes at her. The view from the top is obscured by thick fog, which turns to rain by the evening. A couple floors above Don's apartment lives David Slater, a wealthy middle-aged libertine with an eighteen-year-old daughter named Cynthia, who just had an acrimonious breakup with Don, and an ex-wife in Brazil. Patty finds David ingratiating enough to have him stay for a steak dinner, which she cooks in Don's apartment for the three of them. David stays for the rest of the evening, and undermines Don's moral self-assuredness by almost convincing Patty to marry him. For all his affairs, however, David turns out to be as old-fashioned in his attitudes toward parenting as Patty's father.

Otto Preminger, who directed the original 1951 production of the play, produced and directed the film version with William Holden as Don, Maggie McNamara as Patty, and David Niven as David Slater. The film, which was Preminger's first independent production, was released in 1953 by United Artists without the approval of The Hays Code (unusually for its time).

This play and movie contain examples of:

Alternative Title(s): The Moon Is Blue