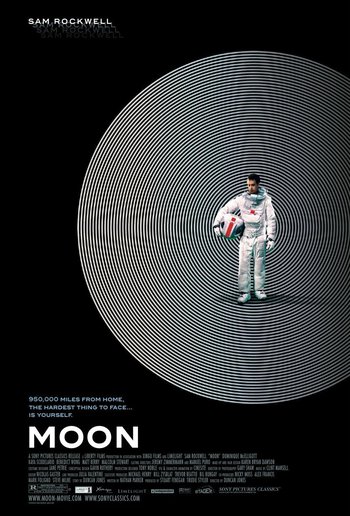 The last place you'd ever expect to find yourself.
Advertisement:

Sam Bell (played by Sam Rockwell) is an employee contracted by the Korean-based company Lunar Industries to extract helium-3 from lunar soil to fuel nuclear fusion reactors on Earth. He is stationed for a three-year term on the Sarang base, with only a robot named GERTY (voiced by Kevin Spacey) for company, and his only contact with Earth being recorded transmissions he occasionally receives from his wife and three-year-old daughter. Two weeks before completing his assignment, he begins to hallucinate, causing him to crash a lunar rover into one of the helium-3 harvesters.

Then it gets worse.

Jones has released a Spiritual Successor with 2018's Mute, and he hopes that he will able to develop a full trilogy of films set in the Moon universe.

Wake me when it's quitting time...
Feedback

After having a run-in with a clone, Sam starts to question if he's the real Sam Bell. GERTY then confirms his doubts.

Example of:
Tomato in the Mirror

After having a run-in with a clone, Sam starts to question if he's the real Sam Bell. GERTY then confirms his doubts.