Film / Monty Python Live (Mostly): One Down, Five to Go 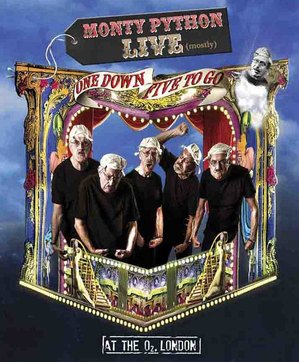 Monty Python (Mostly) Live: One Down, Five to Go is a concert film by British comedy troupe Monty Python, filmed at the O2 Arena in London in July 2014 and released on DVD, Blu-Ray, and streaming in November of the same year. It is the End of an Age for the quintet (formerly sextet until the death of Graham Chapman in 1989).

The troupe lost a lawsuit to the producer of Monty Python and the Holy Grail for £800,000 ($994,600, which he claimed he was owed as royalties from Spamalot), and they decided to raise the money by throwing the stage equivalent of their retirement party.

And what a party it turned out to be.

It serves as a "best of" compilation, featuring many of the Pythons' most memorable sketches—"Spam", "The Spanish Inquisition", "Four Yorkshiremen", and—of course—"Dead Parrot", just to name a few.

The show was done as a series of ten performances, the last of which was broadcast to theatres internationally on July 20, 2014. It is this performance that was released to media platforms.

The DVD/Blu-Ray release was dedicated to Robin Williams, who had been offered the spot of the final night's "Blackmail" celebrity guest, but declined due to issues with the depression which would ultimately claim his life the following month (August).

Who woulda thought, 40 years ago, we'd all be sitting here, reading these tropes?: