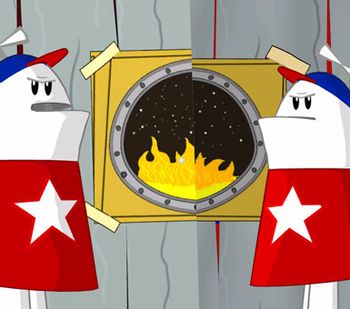 Seamless. Bravo.
"The only reason it falls apart is because I happen to enter the same revolving door, and we do double takes at each other. (This is where film cheats. How the hell would he know what I'm gonna wear that day?)"
— Larry Drake on

his role in Darkman
Advertisement:

Evil Twins! Princes and Paupers! Always Identical Twins! Identical Grandsons! Identical Strangers! Mirror Universes! Me's a Crowd! These and other nuisances all provide reasons why one actor might need to play two or more roles. Here's how they do it.

If there are a lot of scenes where the two characters spend time together or interact, a pair of identical twin actors is the simplest solution. The Mowry twins, the Heder twins (yes, there are two Napoleons Dynamite), the Feldman twins (Fanty and Mingo from Serenity), the Sklar brothers, the Olsen twins, the Sprouse twins, and the Phelps twins (Fred and George from Harry Potter) come to mind. For an existing character it gets more complex.

The most straightforward way to get two copies of a person in the frame is to use a stand-in and only shoot one face at a time, as in the Over the Shoulder shot.

A second, more complicated, but effective way is to use Split Screen, with no dividing line, and use the same camera position for both shots. It's hard to get perfect, and disallows any camera moves, but in the analog era it was the best thing going. The technical errors inherent in this are obvious enough, if the backgrounds fail to match up (due to a camera movement) or the actor's body crosses the line and disappears.

In the digital age, more complex special effects can be used to insert a copy of a person shot on Green Screen, in the same manner as Serkis Folk. The problems inherent in this are the same as for Serkis Folk, as the double is not present on set for his counterpart to act against.

To this day, for budget and acting reasons, the faceless stand-in is still used for the majority of shots. In addition, most episode plots in the above categories require that the two doubles share very little screen time.