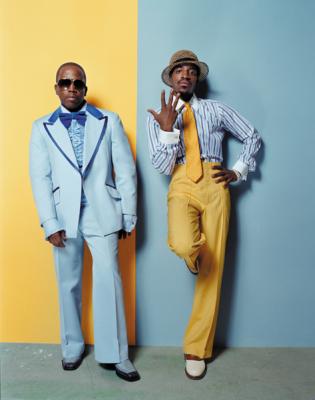 Left: Antwan "Big Boi" Patton. Right: "André 3000" Benjamin
"OutKast, pronounced outcast. Adjective meaning homeless, or unaccepted in society. But let's look deeper than that. Are you an OutKast? If you understand and feel the basic principles and fundamental truths contained within this music, you probably are."
—"True Dat (Interlude)"
Advertisement:

Getting their start in 1990, hip-hop duo OutKast ended up becoming one of the most vital and dynamic music groups of the late 1990s and 2000s, experimenting with a diverse variety of sounds from funk to psychedelia to techno, and helping to popularize Southern hip hop. All of their albums save for Idlewild have been critically lauded and seen as some of hip-hop's greatest records, or even the greatest records ever made in general.

Benjamin and Patton met while attending Tri-Cities High School, a Visual and Performing Arts School. Benjamin's parents were divorced and he was living with his father. Meanwhile, Patton had to move with his four brothers and six sisters from Savannah to Atlanta. Benjamin and Patton eventually teamed up and were pursued by Organized Noize, a group of local producers who would later make hits for TLC. The duo initially wanted to be called "2 Shades Deep" or "The Misfits", but because those names were already taken they later decided to use "OutKast" based on finding "outcast" as synonym for "misfit" in a dictionary. OutKast, Organized Noize, and schoolmates Goodie Mob formed the nucleus of the Dungeon Family organization.

OutKast signed to LaFace Records in 1992, becoming the label's first hip hop act and making their first appearance on the remix of labelmate TLC's "What About Your Friends". During the holiday season of 1993, they released their first single, "Player's Ball". The song's funky style, much of it accomplished with live instrumentation, was a hit with audiences. "Player's Ball" hit number-one on the Billboard Hot Rap Tracks chart. Afterward they would continue to bang out hit album after hit album. The group's original musical style was a mixture of Dirty South and G-Funk. Since then, however, funk, soul, electronic music, spoken word poetry, jazz, and blues elements have been added to the group's musical palette.

After starring in a 2006 musical film called Idlewild (the soundtrack of which is the group's most recent album), OutKast went on hiatus the following year, with both members pursuing solo careers. However, the two briefly reunited for a tour in 2014 to celebrate their 20th anniversary. The two have said that they'll record new material together once they've both put out solo albums. Big Boi's album, Sir Lucious Left Foot: The Son of Chico Dusty, was released in 2010 after repeated delays to rave reviews; in 2012 he released his sophomore album, Vicious Lies and Dangerous Rumors, which was also positively reviewed. Andre 3000 has appeared every so often to chime in a verse, such as on Drake's "The Real Her" and several songs by Frank Ocean ("Pink Matter", "Solo (Reprise)"), but as for his solo album...

Everybody move to the back of the tropes: