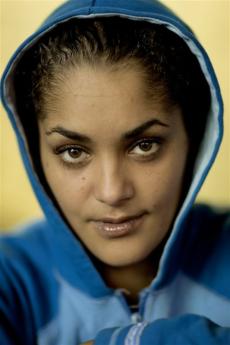 Natasja Saad (professionally known as Natasja or Little T) was a Sudanese-Danish dancehall, Conscious Hip Hop and Reggae artist. A practising Muslim, she not only faced racism and islamophobia from white Danes, but was also bashed by radical Muslims for refusing to be conform to fundamentalist Islam, instead being an outspoken leftist and feminist. She also refused to write the homophobic lyrics common in the dancehall scene.

While she was alive, she was very underground in Denmark, although Jamaicans loved her. After her death in a car crash, she got extremely popular.

Natasja and her music provides examples of: