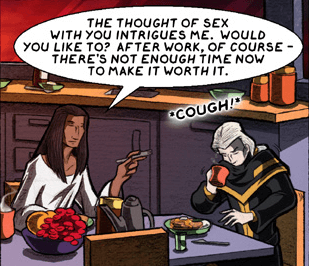 This character is a moral and benevolent person, at least when it comes to matters of romance and sexuality. A person who has a strong (and reasonable) ethical code, a strong (and not misguided) sense of empathy, or both. They also strongly believe in consent. Because of this, regardless of this or in spite of this (depending on the setting), the character believes that Sex Is Good and that it's wrong to impose limits to what sexuality should be like.

This is a character who is strongly opposed to abuse, predation, exploitation, entitlement and Double Standards, while at the same time also opposing judgmental and moralistic attitudes about such matters as promiscuity, Polyamory, open relationships, Friends with Benefits, homosexuality, BDSM and Maligned Mixed Marriage. Since this standpoint is a personal one, the character does not have to be interested in politics or activism. The character is simply leading by example by (directly or indirectly) embracing a wide range of sexuality, either by practicing sexual varietism or by professing their belief in the free love doctrine and by caring about the emotions of everyone involved and it isn't necessary for the character to have an active sex life.

If this character is in a setting when there was no protection, they might have STD Immunity (being that good characters often have Plot Armor) and probably never impregnate anyone/get pregnant.

Also, when the adjective "liberated" is used to describe a female character, it usually means that she's sexually liberated.

Note that embracing does not mean to make something mandatory, although it may be recommended. An Ethical Slut is allowed to be celibate or monogamous if he or she so prefers. However, cheating on a partner is totally unacceptable. Open relationships are okay, but deceit and dishonesty is not. The concept of Ethical Slut is a gender-neutral one: the idea that only women can be sluts is a Double Standard (and even treating 'men sluts' differently from 'women sluts' due to any biological differences would qualify), and the idea that being a slut would be a bad thing (except for the potential health risks involved) reeks of moralism, as well as confused emotions. The trope is named after the book "The Ethical Slut: A practical guide to polyamory, open relationships & other adventures". As the other wiki

Advertisement:
"The authors define the term slut as a person of any gender who has the courage to lead life according to the radical proposition that sex is nice and pleasure is good for you. The term is reclaimed from its usual use as a pejorative and as a simple label for a promiscuous person. Instead, it is used to signify a person who is accepting of their enjoyment of sex and the pleasure of intimacy with others, and chooses to engage and accept these in an ethical and open way rather than as cheating."

Of course, it would be easier to find a male character as Ethical Slut than a female, because Double Standard.

As this deals with people's personal lives, No Real Life Examples, Please!.

Cindy mentions being in an open marriage.

Cindy mentions being in an open marriage.