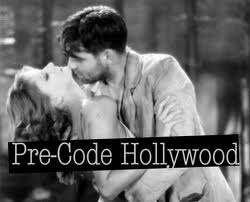 Thought all movies were squeaky clean and decent in the olden days? Think again! note Pictured: Greta Garbo and Clark Gable in Susan Lenox (Her Fall and Rise).
"In 1934 they passed a censorship code, a production code in America and all sorts of things were not allowed on screen after that. You could not criticize the government, you could not criticize corporations, there was a very strict sexual morality. If you look at Hollywood in 1933 it’s amazing how different the films are because so many of them are about normal life and working class people and people having problems with the church or problems with the police, corruption... In 1935 you couldn’t make that type of film anymore."
— Tag Gallagher

The Pre-Code Era is Exactly What It Says on the Tin. The period after the widespread adoption of sound cinema by Hollywood but before the active, total enforcement of The Hays Code. This period stretched from 1928 to 1933, though stragglers continued into 1934 and 1935. This brief, short period is unlike any later period in film history. Imagine seeing old classic films with actors like Clark Gable or Claudette Colbert and feeling that the roles they are playing are too conventional and too cute. You wish they played different roles, you wish that the films weren't so bound by censorship that almost all the roles and the entire plot register as a Dull Surprise to the viewer since the conventions are so painfully enforced. Basically, you wish to see old-time actors operate with the same freedom as the New Hollywood. The good news is that you can, by seeing films from the Pre-Code Era.

Oh sure, the language is still (mostly) squeaky clean, and there is very little full nudity even if there is more skin. But everything is different. In these films, there's no coyness or euphemisms, visual or otherwise; characters, if they like each other, will get physical. Gangsters and bad guys tend to be more Affably Evil without the traits in later films that make them obvious bad guys as an Author's Saving Throw. There are more Karma Houdini villains and a Downer Ending is not rare, though the films are fairly light on the whole.

This period coincided with the end of The Roaring '20s and the early years of The Great Depression and are incredible portrayals of the time. It shows the level of unrest and uncertainty brought out by mass unemployment, urban violence and the worker's movements and strikes in the same period. Male characters tended to be Working Class Heroes more often than not. Women are also shown at work, living alone and dating as per their wishes. Crime movies tend to have prostitutes not as cautionary tales but as genuinely conflicted, morally complex characters. There's more Gray-and-Gray Morality here and Surprisingly Realistic Outcomes happen more often than not. Seen today, the contrast between the films made before the censorship and the period after goes a great deal to showing the impact censorship made on American cinema and the kind of films that could have been made had censorship not been active for the thirty years after the end of the era, dispelling the myth that American cinema were prudish by instinct rather than external factors, showing that they were in fact stifled by an obsolete system that they themselves never set store by.

Some directors who were especially frank and provocative suffered when censorship was enforced. A director like Josef von Sternberg, a favorite of Jorge Luis Borges and an influence on Alfred Hitchcock and many others, made provocative works about sex and power in his films with Marlene Dietrich. Censorship inevitably prevented him from dealing with the same kind of content, and Dietrich herself declined in stardom after the period, never truly playing roles of the same caliber. Frank Borzage, who was Lighter and Softer, but thought nothing of making films about couples who were openly sexual and who tended not to be married and whose films had a real anarchic working class spirit, never recovered fully either. It was also a prolific period of creative outpouring with a director like William A. Wellman making 20 films in a three-year period for Warner Bros, a rate of productivity that he didn't repeat afterwards, even if he continued making good films. Several of the films made in this era disappeared from public view because The Hays Code required older titles to be resubmitted for evaluation for general release in repertory theaters and later on television. Most of them, needless to say, didn't pass muster. They became prized objects for private collectors, and archivists around the world. These films were often more widely seen abroad than in America in the same period, especially at the Cinematheque in Paris, whose audiences became the French New Wave.

A good example is Howard Hawks' original Scarface. Despite being the Trope Maker for gangster films and a phenomenal influence on American cinema at the time to the point of Pop-Cultural Osmosis it was unseen in America till the late 70s where it once again attracted notice and attention, which in turn led to the well-known remake with Al Pacino. Other titles were Trouble in Paradise by Ernst Lubitsch, as well as his Design for Living, an incredible Older Than They Think portrayal of a One True Threesome which anticipates the Free Love climate of The '60s. The films were steadily rediscovered since then with TCM channel being a major supporter of these works. Several of them are released on DVD labels like Forbidden Hollywood with the hook being its Older Than They Think value.

Films from this period also treated sexuality much more frankly. In Baby Face, Barbara Stanwyck sleeps her way to riches. In Topaze, Myrna Loy's character matter-of-factly admits that she is The Mistress of a Corrupt Corporate Executive. Brief nudity was occasionally seen, dating back to the silent film era, as well as scenes with women in states of undress, like Fay Wray in King Kong (1933) after Kong peels off her clothing.

This period provided us the Gangster Film, The Musical and the Screwball Comedy, in addition to some war films like All Quiet on the Western Front. It was also the period of Universal Horror films, titles like James Whale's Frankenstein with Boris Karloff and its sequel Bride of Frankenstein, Tod Browning's Dracula, The Black Cat as well as MGM's one attempt to cash in on the trend, Tod Browning's Freaks which could not be made in any other period but this one. It was also a time of important innovations in special effects, with King Kong released in 1933. All in all, this period of six years, which marked the end of silent cinema and the beginning of sound was a climate of freedom which was all too brief but whose impact reverberated for years to come.

Important Directors from this period are,

Notable films from the Pre-Code Era: