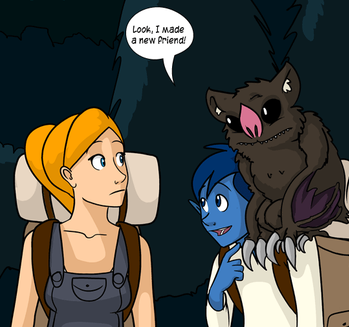 is a webcomic by Jeph Jacques of Questionable Content, focusing on a woman named Alice. She's regarded as a "witch" by the locals in her small unnamed town, meaning she's highly respected and sometimes revered as a miracle worker. One day, after falling from a wind turbine she was working on, she's called to a nearby farm to deal with a strange occurrence: a nearly naked young man with pointed ears, blue skin and a tail, has appeared in a field, fast asleep. This strange man, Ardent, is soon joined by his sister Gavia, who is extremely pale and red-eyed, and floats in the air thanks to nanomachines.
Advertisement:

The story's first chapters have little in the way of action, mainly focusing on character interaction and a small amount of world-building. Little exposition is given before the end of chapter two. A possible central conflict is revealed in chapter three, where things suddenly take a more dramatic turn.

Be aware that the comic overall is more or less Safe For Work, but a few pages near the end of the fourth chapter feature uncensored female nudity, and there are a handful of scenes of fairly bloody violence.