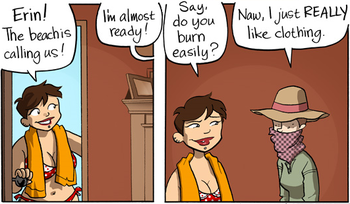 Azusa: It hurts so much.
Mugi: You got really burnt again.
Azusa: I put on sunscreen, but it didn't work.
— K-On!, "Late Summer Greeting Card"
Advertisement:

Some characters just can't take sun exposure, especially if they have pale skin and/or don't go outside much. They tend to overshoot tanning and go straight to sunburned with very little time in the open. Thus, when faced with things like a Beach Episode, they'll do everything they can to not participate, and if they do participate, they'll stay in the shade as much as possible or go to amusing extremes to protect themselves from the sun. If they do decide to take their chances with the sun, they usually regret it.

Related to Embarrassingly Painful Sunburn, where a character who may or may not burn easily gets badly sunburned regardless. This can play into the stereotypes addressed by But Not Too White and The Shut-In. See also Suntan Stencil, when this is exploited.

Daywalking Vampires sometimes have this as a way to show that they aren't completely resistant to sunlight.

Compare with Moonburn, where people get sunburns from things besides the sun.

Truth in Television for people with especially pale skin, albinos, and people from the British Isles.