Powered by a Black Hole 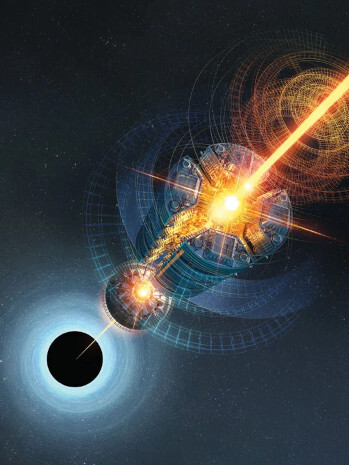 "This is a huge vessel, which is probably more than a match for the Enterprise in terms of firepower. Maximum sustainable warp speed is about 9.1, slightly slower than that of the Enterprise. Power source is believed to be a system which harnesses the x-ray emissions from a captive quantum singularity."
— Star Trek: The Next Generation Writers' Technical Manual, Season 4 edition, on the Romulan D'Deridex-class warbird
Advertisement:

While it is popularly believed that black holes are like giant vacuum-cleaners in space, it is not actually completely true that anything that falls into a black hole is lost forever. In reality, black holes are actually the most powerful sources of energy in the universe, even more so than stars themselves. Even though black holes are famous for not allowing even light to escape, this is only true if light enters the event horizon: their accretion disks are capable of producing light as long as there's a constant source of matter feeding them. When matter falls into a black hole, tidal forces stretch and heat up the material to extremely hot temperatures which gives off potent x-rays. Supermassive black holes in particular, when fed a lot of matter, have the potential to outshine entire galaxies.

Even black holes themselves give off their own energy known as Hawking Radiation,

which, in layman's terms, is the result of black holes slowly evaporating over inconceivably-long time scales of over 10^64 (that's 64 zeros) years on average due to quantum effects near the event horizon. A future space civilization is likely to take advantage of black holes around the tail end of the dying universe when there's no more stars to use.

Harder science fiction will typically rely on one or more of the following real-world theories:

Softer sci-fi tends to handwave it or cite technobabble such as The Power of the Void.

Of course, this is all dependent on a civilization having developed technology that can withstand the extreme conditions near the event horizon, which include massive gravitational and radiation effects and Time Dilation. Additionally, things typically will Go Horribly Wrong if the black hole breaks free of any confinement used (for example, if it's a microsingularity housed within a Space Station or Cool Starship), or the infrastructure that harvests energy is damaged and begins to fall in. In which case, this overlaps with Nature Is Not a Toy.

Compare Our Wormholes Are Different, Spaceship Slingshot Stunt, and Gravity Master for other ways black holes could be put to use.