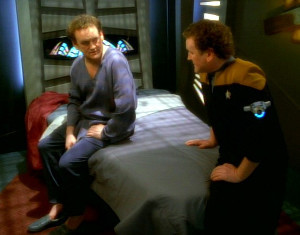 "I hate temporal mechanics..."
O'Brien gets a face full of exploding plasma conduit, which leaves him with an easily curable bout of radiation poisoning. He'll be fine, but Bashir tells him to take it easy.
Advertisement:

Elsewhere, a Romulan contingent is headed for the station...at the same time a damaged Klingon freighter is there. Knowing that the two species mix like fire and oil, Sisko advises Odo to keep them away from each other.

Taking Bashir's advice, O'Brien is relaxing at Quark's, trying to explain the appeal of darts, when he suddenly finds himself on the promenade in mid-throw. Glancing over at the adjacent catwalk, he sees...himself, talking with Quark about a Klingon damaged holo-suite. Flashing back to Quark's, he passes out on the spot.

In sick-bay, Bashir fixes him up and assures him that his vision was just a side-effect of a Techno Babble deficiency in his brain. He's not convinced.

Sisko and Kira meanwhile are dealing with the naturally hardass Romulans. They want the intelligence that the Federation promised in return for their loan of the Defiant's cloaking device, and they aren't happy with what they receive. The ambassadors start interrogating Sisko and Kira, even going so far as to question if Odo is a spy.

Meanwhile, O'Brien is wandering the promenade when Quark approaches him. His holo-suites have been damaged by some rowdy Klingons. In the middle of this discussion, O'Brien realizes this has happened before. When he had his mysterious vision. And indeed, on the adjacent catwalk, there's O'Brien, who vanishes just like before.

Turns out there's a temporal disturbance bouncing around the station. The residual radiation O'Brien got when the conduit exploded has interacted with it, randomly sending him into the future and back again. And he's about to go again. This time he's in Quark's, square in the middle of a massive Bar Brawl. After giving his other self a little assistance in the fight, he returns to Sisko's office and passes out again.

The news ain't good. He's fine for now, but the damage all this time-shifting is doing is adding up. If they can't fix it, he's gonna die.

After Kira has a blow-up with the Romulans, O'Brien is back at Quarks playing darts with Bashir. They've forbidden the Klingons from coming to the bar to prevent the brawl that O'Brien saw, but several come down from the holosuites and immediately pick a fight with the Romulans, instigating the brawl. The fight occurs much like it did in his previous time-trip, but this time O'Brien is ready and does better in the fight than he saw himself do the first time. As security breaks up the tussle, he heads for another trip in time. This time it's not just some random event. He watches himself get fatally shot by a phaser beam from a wall conduit.

Investigating the corridor where the event is set to occur, Sisko and Odo can find nothing odd about the conduit. They station a camera in the corridor just in case. But then Kira announces that she moved the Romulans quarters to Section 47, the same corridor where O'Brien saw himself murdered. Soon, the crew detect that a device was covertly beamed into the conduit.

Sisko and Odo figure out that a food replicator was jury-rigged into a transporter to do the transport work. The modifications will be the only clue about who did the work. Though the crisis appears averted, O'Brien is still nervous as the time approaches when he saw himself die. In the moment, he's sent on another time-shift. Where he finds his own corpse in the sick-bay. Bashir pops into the room, telling him to tell past-Bashir to perform a basilar arterial scan that will save past O'Brien. He returns to the past and does just that.

Odo gets the proof he needs that the Klingons are actually Klingon spies. He rounds them up and threatens to let it be known that their mission was a failure, thus incurring the wrath of Klingon Intelligence, unless they fess up and help him. They consider his offer.

In O'Brien's next jump, he finds himself, his other self and a throng of people in an escape pod. As they leave, DS9 explodes behind them and the wormhole collapses. He doesn't have any evidence of who or what caused the station's destruction. But he intends to find out. He wants to be sent into the future on purpose this time, so he can save the station. Bashir fixes him up with a Techno Babble time travel device, and sends him on his way.

The answer soon becomes clear as O'Brien #1 and O'Brien #2 enter ops. The destruction was caused by a Romulan warbird that's been cloaked outside the station. And it gets worse. The radiation has caught up with O'Brien #1. He's done for. So he gives O'Brien #2 the device and sends him back to warn Sisko.

Kira and the Romulans

Commander Sisko tells Kira to be diplomatic when she meets with the Romulans who are visiting the station to interview the crew about first contact with The Dominion. Cut to her being confrontational during her meeting...

Kira and the Romulans

Commander Sisko tells Kira to be diplomatic when she meets with the Romulans who are visiting the station to interview the crew about first contact with The Dominion. Cut to her being confrontational during her meeting...