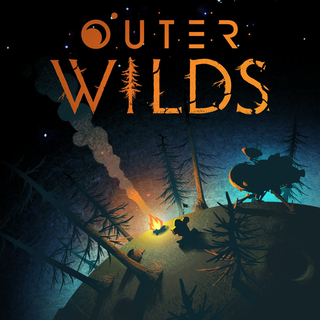 You: You're lucky I'm in a time loop, because otherwise I'd be super dead.
Slate: And you're lucky I don't have you grounded for medical reasons, because I have no idea what you're talking about.
Advertisement:

Outer Wilds is an open-world exploration sandbox game with heavy inspiration from immersive sim games, developed by Mobius Digital and published by Annapurna Interactive. As the newest recruit to Outer Wilds Ventures, you are an astronaut who's just completed their training and is ready to embark on their newest job: strapping in a ship, blasting off into space, and finding out the secrets of the Nomai, a race of precursor aliens who mysteriously vanished long ago. About 20 minutes into your first flight, however, disaster strikes. The local sun somehow goes supernova and violently explodes, wiping out your whole solar system and killing your entire race in a blast of nuclear fire. (Or possibly you die before you even reach that point; the solar system is a dangerous place, after all.)

And then you wake up back on your home planet, staring up at the stars. You discover quite quickly that you're stuck in a time loop, but you decide to use this to your advantage- maybe, just maybe, the Nomai had something to do with why the sun went all kablooey, and by exploring their ancient settlements and ruins, one could be able to stop your imminent demise. This is a mystery that's bigger than your entire race's collective knowledge of the Nomai, and it'll take guts, determination, and a whole lot of smarts to figure out just how to save your world.

The game is a first person exploration game that focuses around exploring different planets in your solar system. Each planet is unique and has a gimmick to it that makes exploration different per planet you're on, from the crumbling crust of Brittle Hollow to the sky-high water spouts of Giants Deep. Your main task is to uncover the history of the Nomai and their people, and to follow in their footsteps to figure out how to save your solar system.

The game was first released on Xbox One on May 29, 2019 (and on PC the next day), with the PlayStation 4 release following on October 15. A Nintendo Switch version is due Summer 2021.

Echoes of the Eye was announced

as DLC for the game, and was released on September 28, 2021. The expansion centres around a mysterious deep space anomaly detected by the Hearthians in the far reaches of the Solar System, with the trailhead beginning with a simple new museum exhibit.

The expansion adds an entirely new location to the Solar System, dubbed "The Stranger" - the source of the anomaly. With the new location comes a new standalone story, filled with a wide range of new mechanics, new lore, new environments, new mysteries to solve, and new secrets to uncover, with ramifications that echo into the story of the main game.

Not to be confused with The Outer Worlds.

Buckle up, blast off, and check out these tropes:

open/close all folders
Tropes in the main game
Tropes in Echoes of the Eye
"My role in this ended long ago, and now I’ve learned my efforts weren’t in vain. Thank you for facing what was hidden in the dark."
—The Prisoner